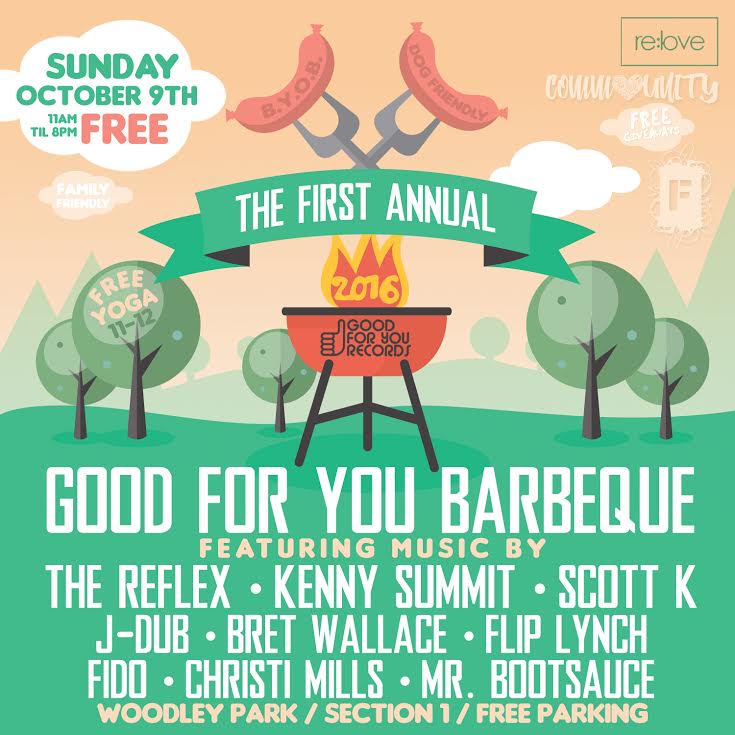 Good For You Records Barbecue w/ THE REFLEX

Disco and House fans in LA can rejoice this weekend with the first “Good For You Barbeque” taking place this Sunday at Woodley Avenue Park in Van Nuys, CA. Featuring the Los Angeles debut of “The Reflex” as well as an array of talented artists including Kenny Summit, Scott K, Brett Wallace, J-Dub, Flip Lynch, Fido, Christi Mills, and Mr Bootsauce. The event is a partnership between GFY and re:love. Did we mention it’s free?

We had the chance to ask GFY boss, Kenny Summit, a few questions about the event:

What is the inspiration behind the “Good For You Barbeque”?

KS: I’m from a big family and every weekend was one family function or another; the minute the weather got nice in NYC we were in the back yard BBQing. Been here in LA for only 4 years, but in that time I’ve made alot of friends and alot of people here have gone above and beyond to support the label. So this is my way of giving back: a fun day in the park with great music and delicious food!

What can people expect from the event?

KS: We have a welcome table set up for people to make donations. Each person who donates even a dollar gets one of our giveaways, whether its a dollar or 20 dollars, if you donate something you get a nice treat; t-shirts, dog tags, stickers, we have a ton of giveaway. As far as the music, we got some of LA’s finest including We Own The Night’s Scott K, Unity’s Christi Mills and Mr Bootsauce, re:Love’s Bret Wallace, J-Dub from Chicago, Flip Lynch, DJ Fido and of course the main attraction, THE REFLEX is flying in from the UK for this jam.

This will be the first time “The Reflex” has appeared in LA. Do you see more “disco” inspired artists coming to LA in the future?

KS: I’ve had out quite a few proper DISCO producers / Djs over the years but I think because of the resurgence of vinyl and all things ‘old school’, I’d say LA is already deep into the disco bandwagon.

KS: Been listening to The Reflex’s remix of “Who Is He” which is out now on Defected. Solid track to begin with but Reflex takes it to another level with his remix.

More Information on the event can be found HERE.