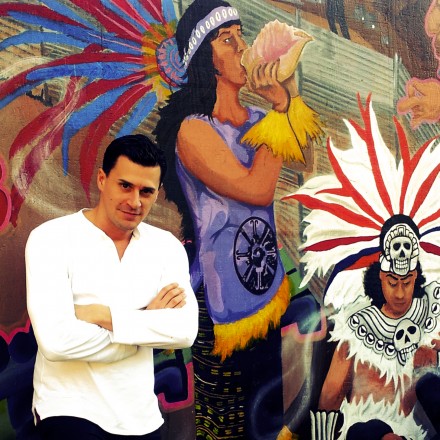 A DJ for twenty years now, Kris Santiago started playing rap & soul records at Frankfurt’s local club called “Funkadelic” and fell in love with the disco-sample based music early on in his life.

Being one of the two original creators of “Nu Disco Your Disco“, a quite successful blog, artist management & record label dedicated to free mixes and tracks of the nu-disco & feel-good house genre, the charismatic German with roots in Mexico and Croatia is also into muisc-production for quite some time and gained recognition for reworking Goldroom’s “Embrace” on several media-outlets.

He paired up with Cologne-based producer and fellow NDYD-connect Toniia to create a beach house-remix of Rose’s “No Good” that ended up being played over 40.000 times on Soundcloud in a short period and has been featured on many famous house-music blogs across the globe.

By producing remixes for #Mali (Hator Records) and Husky (Bobbin Head Records) in the last months of summer 2015, the duo soldified it’s status as upcoming remixers in the house-music scene. Santiago released his debut single “Let It Go” in August 2016 on his own label-imprint NDYD Records and made the Top 50 Lounge/Chill Charts on Traxsource while the Blu Curacao remix had been played over 20.000 times on Spotify alone.

On the decks, Kris is shifting between House, Deep House and Disco and has played in the past two years all over the world due to his extended network of disco and house music enthusiasts. Thanks to them, he has been able to spin records in Miami Beach (at the WMC and MMW from 2013 on every year), in Paris (Wanderlust), in Cannes and Monaco during the Cannes Film Festival 2014 and the Formula 1 Grand Prix at an private event on Sean Combs’ Oasis-yacht, as well as in Dubai (TOMO), in Berlin (Cosmic Kaspar), in San Diego (Palomar Hotel & AC Lounge), in London (The Old Queen’s Head), in Istanbul (Cue Istiklal, Klein), in Bodrum (B-Long Beach) in Oslo (Angst Bar, Stratos, The Thief), in Frankfurt (Gibson Club), in Stockholm (Scandic Anglais)in Basel (Singerhaus), in Brno (We Love The Boat Party) in Aalborg (Vestera V4) and Sofia (Blender).