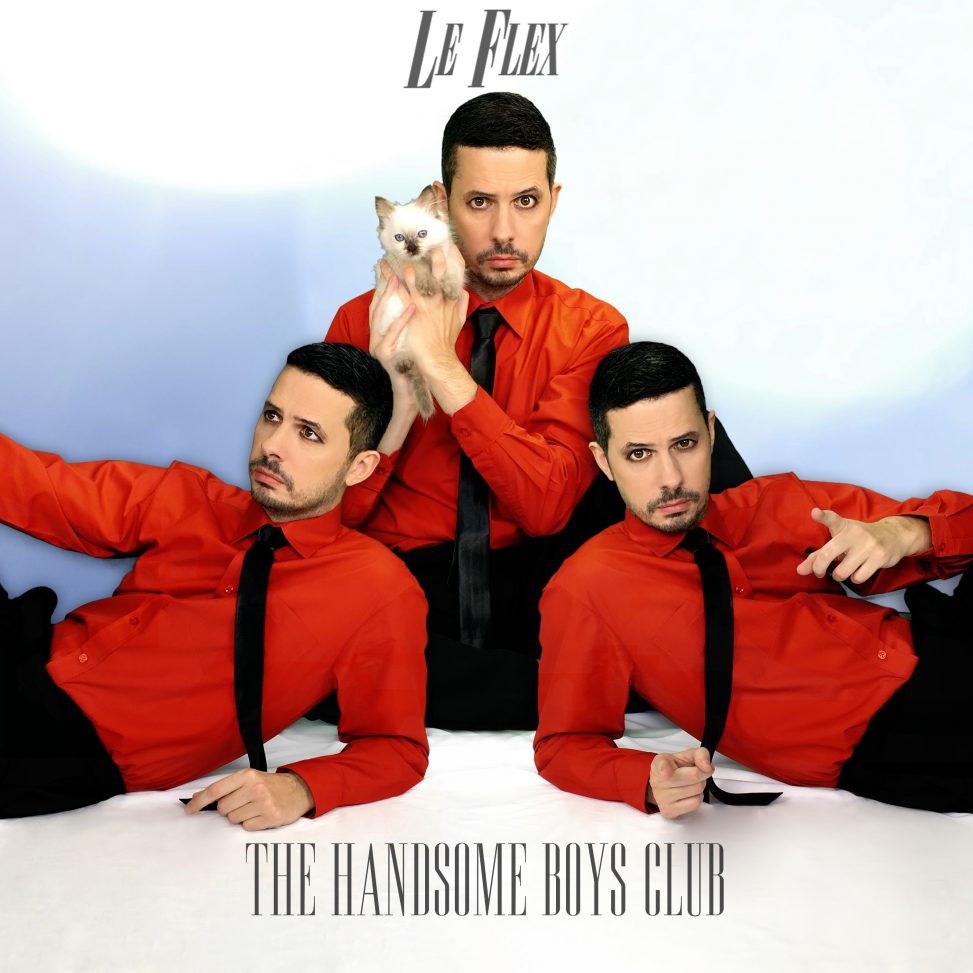 it’s Sunday and it’s snowing at the official start of spring.

There are only very few things on such days on Sunday and strolling around to through snowballs on snobbish children gets boring pretty quick besides the cold breeze is usually provoking a hefty and loud cursing attack in me so I dashed that outdoor idea pretty quick out of my mind before some police car may come along and takes me to a warmer place besides my home.

Instead, I opted for writing this album review of ‘The Handsome Boys Club’ which is Le Flex’ second album and another milestone in his promising career and also another reminder for me that he now lives almost in Scotland and won’t be able to punish me if I am writing a bad review. But hey, these are the risks people taking when producing music and are looking for a career in the brutal pop music business, right?

But before I head into listening to ‘The Handsome Boys Club’ for hours, heck days, I wanted to give you some inside knowledge in case you are running out of topics in a pub in North London or elsewhere:

Did you know there is a half-brother of George Michael still around and singing?
He goes by the name of Fleksos Hardyiotou and has been never mentioned by George because and him had vicious snowball fights in their childhood which strained their relationship. Fleksos left home soon after George threw Fleksos’ kitty out of the window and never returned to East Finchley.

Now that I spilled the beans, it is way easier for me to go through this excellent piece of history. Imagine Danii Minogue would have taken over from fading and aging Kylie or Solange took the place of baby-momma Beyonce…

So it is probably the right time to get Fleksos a.k.a. Le Flex into the limelight and his latest long-player is incredibly…long. No fillers just thrillers!

Starting with the silky filler ‘For Sure’, a heavily sexual introduction (for Brits it is heavily sexual. For the French it is not even close to foreplay) that leaves nothing but clothes on the floor.

On the second track called ‘Since You Left Me Lonely’, Fleksos is talking about his addiction to Scotch.

It wasn’t easy for him to admit it…wait it was but anyway, in the lyrics you can clearly hear out his passion for the golden brown as another woman left him stranded in the middle of nowhere called Essex because he couldn’t wake up in time to make her breakfast instead opting to sleep and cure his hangover.

Probably the only real tune for the dancefloor on the album (yes, you don’t have to skip on for more dance tracks, this one it is.) is ‘In The Rain’ and it is my personal favourite which means I will add this to my spotify playlist on position No.1 (if I do receive a free bottle of Appleton-rum). Hot and fiery as an middle-aged man with eyeliner and a kitty in hand ever can be.

If you are into very,very,very slow ballads, ‘Thinking Of You’ (another sad ode to Scotch) should be working perfectly fine for you and your partner while making intimate love on the airstrip of rocky Gibraltar or on a Friday afternoon at a sandy public beach in Dubai.

Next up is ‘Love Like No Other’ is another song where Fleksos is talking strictly sex. I could go into details but I leave it to you to read in between the lines…’if I come on kind of strong’ sounds like Max Mosley co-wrote it.
The following interlude after ‘Love Like No Other’ is basically the well-mannered goodbye to the rather rough one-night-stand.

At position 8, ‘Ev’ry Time’ remarkably sounds like when Flight Facilities and Satin Jackets decide to team up to produce a hit-single which also is being used in the next Samsung Galaxy 11 ad. Someone in publishing and on-licensing should seriously look into this as I am 100% this should excel in th world of ads immediately.

After a little adventure to the present time, the man known from his funny and entertaining youtube videos is stepping back in time with another uptempo 80’s song loaded with shoulder-moving synths. ‘Take My Hand’ tells the story of a middle-aged man who is desperately trying to rise up out of the bed after a long night at the window at Mickey D’s. Back-pain contributed to the emotions spread throughout the song.

I am not sure who is hitting the high notes in this beauty called ‘be The Remedy’ but all in all it sounds like eating caramel and vanilla ice-cream on a Sunday evening while watching Dinner Date with your loved one.

‘Breaking your Heart Now’ is actually resembling the situation when you had almost all of this Ben & Jerry’s ice-cream and you can’t finish it all up and you are trying to let it go and throw it away before it’s completely melting away next to you.

Finally, we got ‘In My Dreams With You’ which is also is nothing short but once more Fleksos love-story to his beloved Scotch. A secret place could be the pub down the hill between the two farms but more probably the abandoned Maunsell sea forts off the coast of Kent.Needless to say that Ben Macklin will try to conquer that place with a boat if he heard of the news about Scotch being available across the sea.

Now that I’ve walked you through piece by piece, it is time for you three people (Le Flex, Le Flex’ mom and my lawyer trying to find out why I was sued by Le Flex) to listen to this masterpiece yourself. Believe it or not, but it gets a five out of five stars from my side (and by that I hope Le Flex drops the lawsuit).