After months of hard work, Berlin newcomer Mogul released his debut EP. His artistic approach of Funk and Disco mixed with RnB and Hip Hop became widely recognized on his visionary remixes of Jay Sean’s “Sex With The Ex” and Brandy’s “Scared Of Beautiful” and gained him the backing of key figures like Darius, Harrison and Delicieuse Musique.

For his debut EP, Mogul managed to sustain a funky vibe throughout the whole release. “Without A Doubt” which features Canadian singer Dana Jean Phoenix and has been premiered by EDM.com is the song that will kick-start your summer, not only offering audible patches of a great party at the beach but a magnificent instrumentation that will leave your body shaking of joy.

Next in line is “Get Freaky” featuring talented newcomer Sugar. Mogul and Sugar herewith create the female version to Marvin Gaye’s “Sexual Healing”. While most people feel the need to become explicit when talking about their bodily obsession for one another, Sugar manages to keep the lyrics 100% quotable but keeping an erotic vibe to the general radio friendly atmosphere of Mogul’s superb instrumentation. The success of their co-operation became visible very quickly as “Get Freaky” managed to get airplay on big German radio-stations Radio Hamburg and 1LIVE (WDR) as well as the huge UK-webradio show Future Beats by DJ Complexion.

“Can’t Hold On” featuring Australian singer Kids At Midnight is a bit deeper as the vocalist offers a vision of losing her loved one on an emotional but equally danceable Mogul production that gained a lot of love by well-known producers for its incalculability lately.

“Artistic” is the sleeping giant of the EP. A pure instrumental that showcases Mogul’s immense talent in the art of arrangement. Pianos and orchestral elements blend that well with unorthodox drums and claps that one simply has to give in to the vibe and keenly follows the song. A true masterpiece.

Last but not least, there’s the highly danceable Funk-/Disco-homage “Some Days”, a song especially made for a sunny day out with the homegirls and homies. Shake a leg.

“Free Limitation” already received mad love by well renowned blogs and magazines. Amongst those, the following articles can be found: 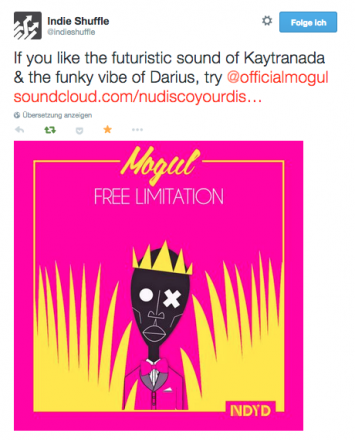 Also – if you’re more of a Hype Machine person, you can show the EP some love right here: